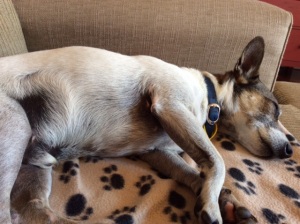 Sleeping on the couch at midday.

I’m not afraid to admit it, I envy my my dog’s lifestyle. As I write this he’s flat out on his side, legs out, sleeping. It’s midday. The saying ‘It’s a dog’s life’ just isn’t true. Dogs’ lives are great. Previously I’ve estimated that my little fella sleeps around 20 hours a day. I thought that this was normal for a dog, until Encyclopaedia Internet told me that dogs generally sleep an average of 11 hours a day. This is only a a couple of hours more than people, who are supposed to average around 7 to 9 hours. So, what’s going on here? He’s not old. He’s not sick. It can only come down to the fact that he likes sleeping, and he’s really good at it. I’ve always been a good sleeper. As a teenager my mother would come into my room, usually around 11am, and snap open the blind, forcing me to start my day. As an adult I’ve continued to resist morning activities. On first dating my other half he all but gave up on going out for breakfast on the weekend as I would take the opportunity to sleep until a time that went well past brunch, to a time technically closer to lunch. Before-work exercise routines were also out of the question until I joined a group of girls whose company I enjoy so much it outweighs the dread of getting out of bed (read more about this here). Truth be told, I’m always the one who pitches a starting time for our runs that is, sensibly, after sunrise. My bid is rarely successful. Recently, with training for a half marathon well underway, I’ve been getting up at 5.30am on Saturdays to do long runs with the girls. Long runs are a lot easier to do with others, so despite hating my life and everyone in it when the alarm goes off, it’s more than worth it once the run is done. 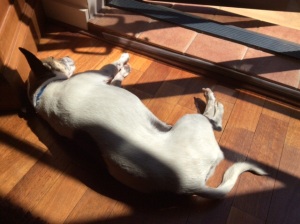 Sleeping in the sun at approximately 2.30pm.

My little dog shows no sympathy when I wake him up to give him his breakfast at 5.30. He eats it quite happily before heading upstairs to go back to sleep in the spot I’ve just vacated in the bed. It’s no wonder I envy him. I do know though, that when I get home and need a mid-morning (and probably a mid-afternoon) nap, just like the girls on my long run, he’ll be there with me, right to the end.