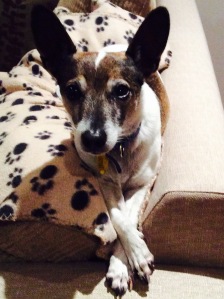 Twilight and I went to the vet yesterday and he taught me an important lesson: don’t settle for less than you deserve.

Early on in his little dog life, going to the vet was not the ordeal it has become today. You waited a while in a room filled with shelves stacked floor to ceiling with food and treats and interesting smells then went into another room where a nice man/lady might poke and prod you a little bit and afterwards give you pats and some dried liver treats to try. No so bad. In his mind it seemed a fair exchange, you cause me some minor discomfort and I get treats. If the vet didn’t hold up their end of the bargain, he would demand payment before leaving the room.

As time has passed however, vet visits have let to more serious poking and prodding and eventually, not so long ago, to unspeakable horrors (for dogs and humans alike). So much so that on this visit, when the vet appeared, he immediately headed in the opposite direction – four to the floor, straight for the door.

In an effort to smooth the way, the vet offered dried liver treats straight up as a sign of goodwill. He wouldn’t have a bar of it. The treats were rejected outright. Left scattered on the examination table at his feet. Un. Heard. Of. I wonder if he figured that by not accepting the treat, he would similarly not have to accept the treatment.

The consultation proceeded. The vet left the room to get the required equipment. The vet came back…with a small purple box. The secret treat box, never before seen in five years of visits. From the fridge. Containing cheese and fritz.* This changed everything. You’ve never seen a small dog regain his appetite more quickly. Half a block of cheese and few slices of fritz later he trotted out of there with a full belly and the knowledge of the secret treats and how to get them forever tattooed on his little doggy memory.

Goes to show, it’s sometimes worth holding out for something better.

* Eastern seaboard dogs will know this as devon.