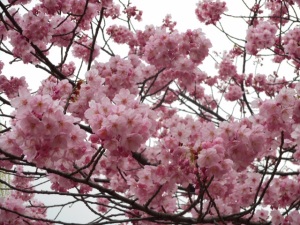 It sounds ridiculous, but it was kind of a coincidence that we arrived in Tokyo a week before the cherry blossoms (sakura) were due to bloom. Cherry blossom season is peak season for tourists, so we’ve generally avoided it due to the crowds, higher accommodation costs and difficulty finding vacancies. This time however, we’ve done it properly – staying within walking distance of Ueno Park, one of the main cherry blossom viewing sites.

Hanami, literally blossom viewing, is a Japanese tradition that takes picnicking to a whole new level, with prime spots under cherry trees staked out several days before they bloom. I knew that hanami is a big thing in Japan, but I didn’t know just how big. It really has to be seen to be believed. 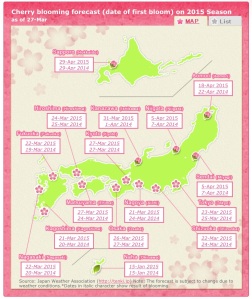 Weeks beforehand, the cherry blossom forecast is issued predicting the dates the trees would bloom working upwards from Kyushu and Okinawa in the south to Hokkaido in the north. We arrived in a city coloured pink, with sakura themed promotions and decorations in just about every shop, restaurant and major train station.

In Ueno Park designated picnic areas have been marked out with tape and even the toilets have been given a temporarily festive new façade. Large rubbish collection bays appeared overnight, made conspicuous by the fact that finding a roadside or park rubbish bin in Japan is akin to finding the holy grail.

For some, as the predicted bloom date drew closer, it seemed the strain of waiting was getting too much, with single, randomly located early blooming trees becoming the subject of thousands of photos. Some parties also took the opportunity for picnics under the still bare but about to burst branches, capturing the spirit if not the full beauty of the occasion. The anticipation was palpable.

The first sign that we were close was a young man dressed in a suit at the supermarket clearing the shelves of drinks and chips and other snack food. We watched him load it all into an esky he’d parked outside. It didn’t seem like a usual weekly food shop. The second was footage on the TV of other hapless young chaps in suits (the office juniors) sitting somewhat forlornly alone in the early morning chill (it had dropped around 4 degrees celsius overnight) in empty picnic spots, holding the fort for their co-workers.

And then it happened. Like someone turned on Spring with a switch. A warm sunshiny Saturday. Chaos. Ordered chaos. In full bloom the blossoms are spectacular, a soft pink and white cloud, dense and delicate all at the same time. Thousands of people squeezed into the park taking up every available space, sitting stoically on small picnic mats, shoes off and lined up neatly around the edge.

The fever has been easy to catch and I’ve found myself taking one photo after another, never fully capturing the beauty and feeling of the new season.

Despite the thick crowds I’ve been drawn back again and again to the park to walk under the trees, eyes upwards to take in the blossoms, eyes downwards to survey the picnics. It is a time so anticipated but so fleeting, as with even the slightest puff of wind the blossoms are already starting to lose their petals. I now realise that the sheer beauty of the moment brings with it a collective understanding of the need to make the most of it.

up close
even the cherry blossoms
of Ueno pass on