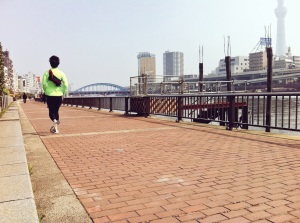 Going for a run while you’re on holiday in another city or country is a great thing to do. You can fool yourself, for a short time at least, that you’re a local. You can also get to things you might not otherwise be able to reach at walking pace and have experiences beyond those normally associated with the usual business of travel.

Earlier this year I was lucky enough to spend a month in Tokyo. With the luxury of having little else to do and the crazy idea that training for a half marathon is a fun way to spend a holiday, I unpacked my running gear and ventured out into the unknown. Here’s what I discovered.

Leave the Garmin at home. It’s rare these days to find a runner who isn’t hooked up to some kind of tracking device. While I was in Tokyo I wanted the extra security of having a phone and a map handy, so I left my Garmin watch at home and signed up to Strava. Best thing I ever did. Even though I didn’t get lost and really didn’t need to refer to the map, not looking at my Garmin every two seconds and being disappointed by my ridiculously slow pace (see next point below) meant that I paid more attention to my surroundings and just enjoyed running.

Forget about trying to break any records for pace. It goes without saying, Tokyo’s a busy city and there’s a lot of people. Keeping to the left while you’re using the footpath isn’t a thing. Old ladies in Japan also have the ability to walk so slowly you’d swear they weren’t moving at all. Despite being just four foot tall, they can also dominate an entire footpath, instantly blocking any passing manoeuvre with a single, minute, movement. Oh, and there’s also lots of traffic lights and roads to cross. Lots.

Pack modesty shorts. This is kind of silly, but one of the first things I noticed was how many clothes the local runners were wearing, even though it was pretty warm. I know it’s not a fashion contest and I’m not usually easily influenced by these things, but in my usual running gear (long lycra tights and loose t-shirt) I felt like I stuck out like a…foreigner. Everyone else was wearing full, loose-fitting tracksuits or, if they were wearing tights, they also had long shorts on over the top. Happily, this gave me an excuse to visit some local sports stores and buy some very nice, new, nike running shorts. (The true modesty of which is questionable, but hey, we are running afterall…)

Find a river and run along it. This is your best bet for uninterrupted, longer distance running. Most rivers have a pathway along each side and you wont get stopped every 50 meters by traffic lights (well, only if there’s no bridges you have to go up onto the road and over, but that’s another story). Parks are also good, but sadly, they’re often pretty small and you’ll be lucky to get in a 5km loop.

Remember to be sun smart. It’s shameful to admit that an Australian girl would forget to put on sunscreen before going for a run in the middle of the day. Outside. In the sun. For some reason, it never occurs to me that it’s the same, burning, sun that shines in other parts of the world, even in cities filled with skyscrapers! Because of this I got one of the worst sunburns I’ve had in years (as well as a subsequently wicked tan that no-one ever saw because it was winter).

In my next post I’ll write about the different runs I did and some different places to try out if you’re going to go running in Tokyo. In the meantime, please have a look at my other posts on Japan and, if you’re interested, read more about running in my home city of Canberra.

4 thoughts on “Tips for running in Tokyo”